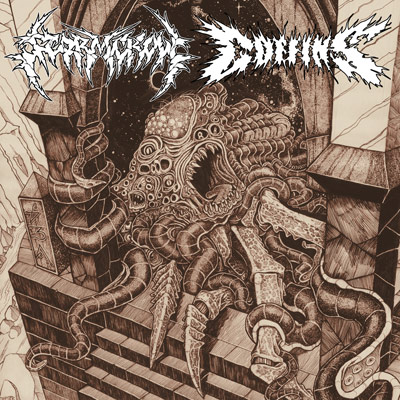 Last year Stormcrow and Coffins laid waste to the West Coast of the United States on a 10 day tour culminating in both bands appearing at the Los Angeles Murderfest. During the tour the mutual admiration both bands already held for one another was permanently forged in steel and a split release was conceived and agreed upon.

Side A features a single track from Oakland’s Stormcrow, their longest ever clocking in at massive 13 minutes. “Path To Defeat” is a song Stormcrow were playing in a less developed form on last year’s tour and finally got into the studio where it was given the Earhammer treatment by Greg Wilkinson of Laudanum/Brainoil and Salvador Raya of Asunder. A monolithic combination of the heavy crust they are beloved for, classic death metal and a creeping, omnipresent doom vibe.

The Coffins side starts with new track “The Black Fog Of Burning Flesh”, a song that would fit perfectly with the abominations on their 2008 LP “Buried Death”. In customary Coffins fashion, it’s a no frills, crawling, drenched in the mire death metal deconstruction. It’s followed by a re-recording of “Slaughter Of Gods” from their 2005 debut LP “Mortuary In Darkness”, a live staple that will make any primitive death metal fan lament the evolutionary tendencies of Celtic Frost.

Sick artwork from Digestor of Ghoul.