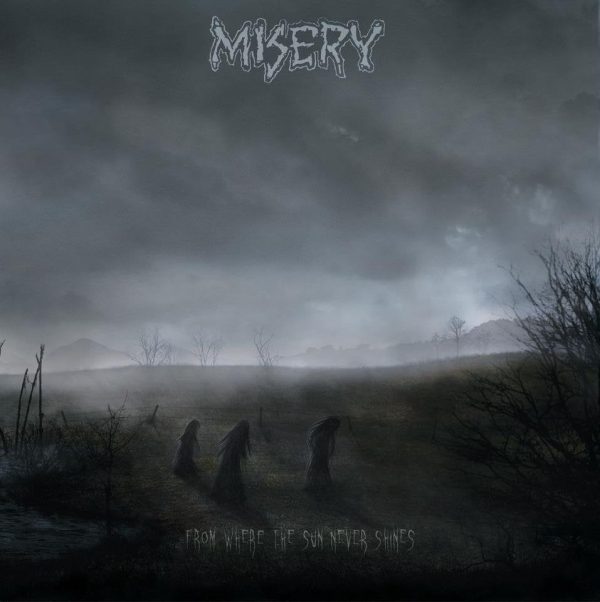 MISERY – From Where The Sun Never Shines – 2LP

Of course, MISERY needs no introduction, having been prophesizing the end times while blasting our ears for the last 25 years now. 25 years and only three full-lengths. For many bands, after such a huge gap between releases (it’s been 9 years since their somewhat lacklustre splits with TOXIC NARCOTIC and PATH OF DESTRUCTION; 16 years since the now-legendary “Who’s the Fool… The Fool is Silence” LP), the original spark isn’t there anymore, or the band merely splits up. Thankfully, neither of these are the case with MISERY. In fact, it is safe to say that this is the best thing the band has recorded in their entire history, and this seems to be the start of a whole new exciting chapter for the band.

Recorded in their own studio on their own time, this record has been slowly taking shape over the last five years or so. I still remember the day when I was in Minneapolis hanging out and went over to the House of Misery to drink beers and watch the band practice. Before anyone else showed up, Jon played me a couple of tracks they had just recorded a couple days prior – the two earliest tracks recorded for this album. At that point, I knew that this was destined to become a classic record… if it ever came out.

The first of the two songs I heard was the opening track, “Mother Nature”. From the dark and apocalyptic introduction to the slow build-up with Gary’s tribal drums and the haunting sound of a crow in the background, this is the ultimate record-opener. When it kicks into full gear and we finally hear the buzzsaw guitars kick in, we know that this record is a force to be reckoned with. From this point onward, there is not a single let down on this record. MISERY have rejuvenated themselves after years of relative silence and real life bullshit getting in the way. The world is in a much worse spot than it was in 2003, and the songs reflect that. Unlike other “apocalyptic crust” bands out there, these songs aren’t just some abstract “epic” metal songs with a vague “end of the world” theme; nor are these clichéd empty slogans. From the mourning cry of “Mother Nature” and “Just Never Ends” to the matter-of-fact “Oil Age”; from the bleakness of the soldier’s tale “Ready Aim Fire” to the somewhat hopeful “All of Us” and all points between, the lyrics are just as top-notch as the songs themselves.

In addition to the brand-new originals, the band has re-recorded an older track of theirs, as they tend to do on their full-lengths. This time around, their Who’s the Fool… days are revisited with a brand new version of “God Squad”, which has always been a favorite of mine. Given these times of horrific religious fools popping up everywhere and affecting all sorts of policies, this is a more than appropriate song of theirs to revisit. Also appropriate for this release are the two songs they chose to cover – “The Hunt” by NEW MODEL ARMY, and “ICBM” by AMEBIX, respectively. If you know MISERY, then you know that these two songs are highly appropriate cover tracks (to say the least!)

When this originally came out as a download-only release last summer, I literally listened to it every day for a month. As important as the new AMEBIX record was, I was (and still am) much more excited by the brand new MISERY record – they have always stuck to their roots, and like a good wine, seem to get better with age. If you even remotely consider yourself a fucking punk, then you need this record. (Inbred)