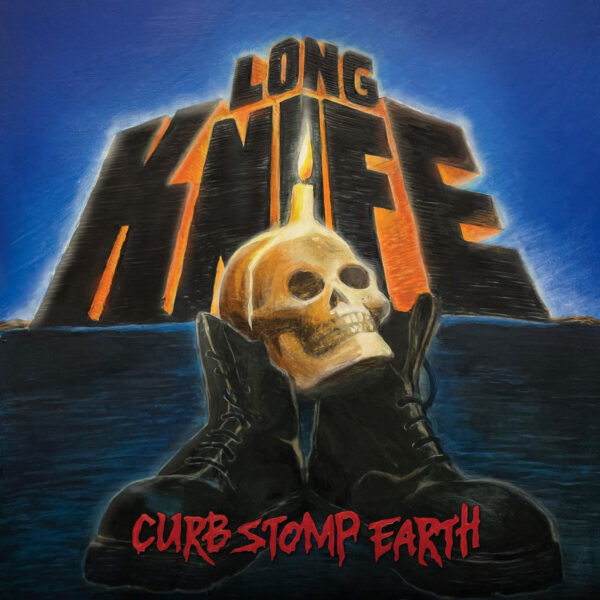 Sorry State says:
The third chapter in the decade long existence of one of the most depraved Portland hardcore bands ever. If you know, you know, as LONG KNIFE has channeled and perfected the POISON IDEA sound, though if you pay attention to their catalog, you can see how they have evolved into their own beast over the years, making the PI comparisons trite. Every song on this record offers something different, whether it’s keyboards, horns (yep), what sounds to be operatic gang vocals, or just straight up hardcore bangers. This LP still maintains the intensity, insanity, and aggression these maniacs are known for, though there seems to be a bit more melody thrown in under the chaos this time. The riffs, solos, bass licks and Colin’s vocals/lyrics are just as awesome as ever. And of course, the lyrics are just as cynical, disturbing, and well written as we’ve come to expect. There is no slowing down for these guys and the Earth is ready to be curb stomped again and again with LONG KNIFE’s fucked up pummelling songs for these fucked up times. Each record comes in a deluxe package – thick jacket, printed inner sleeve and a huge poster plus stunning cover art by Alina Radetsky.

Our take: In case you aren’t familiar with Long Knife, they began their life in Portland around a decade ago, and while they were an excellent, powerful hardcore band from the beginning, they were perhaps most notable for how much they sounded like Poison Idea. While there’s still some Poison Idea in the equation on Curb Stomp Earth, it’s the wide-vista’d, pop-inflected Poison Idea of Feel the Darkness rather than the earlier hardcore stuff. It sounds like, with Curb Stomp Earth, Long Knife has thrown off any preconceptions about what their music can or should be and let their creativity run wild, arriving at a real masterpiece of a punk record. There are so many moments on this record I never would have seen coming… the grandiose opening track “Modern Fatigue” (which features a choir!), the boogie woogie saxophone on “Uncle Phil,” the spooky organ hooks on “Scum,” and the anthemic finish to the album-closer “Coast to Coast.” Not only are these moments causes for a stoke attack in and of themselves, but they sit atop a solid plinth of the fist-pumping, straightforward hardcore Long Knife has always excelled at creating. It’s one thing to create an album full of left turns that keeps you guessing about what’s coming next, and another to create a surprise-packed album that’s just as exciting on the 10th listen as the first. Curb Stomp Earth achieves that goal, and it’s undoubtedly one of the most exciting and invigorating punk albums we’ll hear this year.