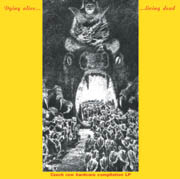 “I want to start by saying that it is an impressive effort to get this compilation together. Not only ’cause there’s 12 bands, and 11 labels, of which all more or less kicks serious ass. No, not just that, but also ’cause of the 52(!) paged fullsize booklet. Each band gets two sides and the labels ˝ each. But that’s not all, there’s also a 22 page Czech Republic scenereport cover the years 1978-2003. Complete with lots of pictures and stuff. Way to go!! Gride, Homoconsumens, Not, Innoxia Corpora, Nema Barikada, Mass Genocide Process, Sicherhatesystem, Space to Being, Dread 101, See You in Hell, Underfire and Friendship Forever are the bands on this comp. And if you have any knowledge of the Czech Rep. Scene you know none of them are bad really. And if you don’t have any knowledge, GET THIS! And there’s only 4 tracks in English on this, one of them a cover, and that’s also a big plus. A LP comp. That doesn’t get boring, ever, that’s a good effort in itself.“
http://www.attackfanzine.net


“LP: Whoa, let me mention at first that this sampler flat out rules as it rages from the first to the very last second! What you get are 1 to 3 attacks from some famous as well as entirely unknown bands, so be prepared for some madly quick, powerful hardcore (UNDERFIRE, MASS GENOCIDE PROCESS, INNOXIA CORPORA), ragingly intense crust (DREAD 101 – https://www.insanesociety.net/dread101 –, NEMÁ BARIKÁDA – http://sweb.cz/nemabarikada –, HOMOCONSUMENS, SICHERHATESYSTEM) and/or entirely ripping, rapid fire, wild thrashing madness (SEE YOU IN HELL –http://www.seeyouinhell.cz –, NOT, GRIDE, SPACE TO BEING – http://www.spacetobeing.wz.cz –, FRIENDSHIP FOREVER). There’s not one single stinker among these 12 hordes / 25 assaults, so it wouldn’t make much sense to list my faves! Okay, if I ever will be forced at gunpoint to do so, I would whisper MASS GENOCIDE PROCESS, NEMÁ BARIKÁDA, HOMOCONSUMENS, GRIDE and SPACE TO BEING, but that doesn’t mean the other groups don’t have the ability to knock me out of my concrete socks! In addition the sheer magnitude of the crushing music itself, this compilation also contains a huge, eye-catching 52-paged booklet which is divided in 2 halfs and while the first part contains the artwork plus lyrics by the bands, the second element features a well written Czech scene report (from 1978 – 2003!!) and includes tons of awesome pics! Now that is cool if you ask me! To come to an end: This record is a fucking killer in every way possible!!
WARPRAYER newsletter issue 98

“’t heard a compilation this good in like 10 years or so. Many labels were involved in this project. The bands included are FRIENDSHIP FOREVER, SEE YOU IN HELL, SPACE TO BEING, MASS GENOCIDE PROCESS, NOT, HOMO CONSUMENS, GRIDE, INNOXIA CORPORA, DREAD 101, UNDERFIRE, SICHERHATE SYSTEM and NEMA BARIKADA. Most of them are great and play very fast hardcore/punk. Get this record! {NW}”
HEARTATTACK issue 41

“A valiant, support – the local – scene compilation of the Czech Republics fastest bands!! A superb effort done here, made inavluable due to the fantastic, gigantic booklet that accompanies this monster LP, filled with info/history on the Czech hardcore/punk scene dating back to the 70s. This zine is worth the price of admission alone. But wait, you get a handful of songs each from some of the Republics finest hardcore/thrash/grind units, check this out: tank destroying crust from DREAD 101, MASSGENOCIDE PROCESS, raging grind from NOT, SEE YOU IN HELL, GRIDE, NEMA BARIKADA, raging fast hardcore from HOMO CONSUMENS, SPACE TO BEING, SICHERHATESYSTEM, FRIENDSHIP FOREVER, UNDERFIRE and some tuneful politi-core from INNOXIA CORPORA. A multi-label release, ours came from Insane Society.”
SHORT, FAST & LOUD #11

“Since getting into hardcore and punk 20 years ago I have always had a global perspective that has been fueled by the BCT tapes and more important being good friends with Imants who is always slipping me tidbids of info, records or tapes from some distant scene. Dying Alive is truly a scene effort as no less than 11 labels and 12 bands work together to release a record documenting the current Czech scene. The LP destroys with a mix of frantic paced hardcore, grind and some mellower more political street punk bands. My favorites being SEE YOU IN HELL, HOMOCONSUMENS and INNOXIA CORPORA. The LP is accompanied by a huge 50 page 8-1/2“ x 11“ fanzine that is a detailed scene report from 1978 through until 2003 as well as band pages for the band participating on the comp. After compiling the „Toronto City Omnibus“ LP and organizing the release show, I can truly appreciate all of the work and effort that went into releasing this document. To work with 10 other labels in organizing the release is a true testament to the labels dedication to their Scene. You are the Scene… Support both your locan and International scenes today. (CC)“EQUALIZING – X- DISTORT Vol.4, issue 3