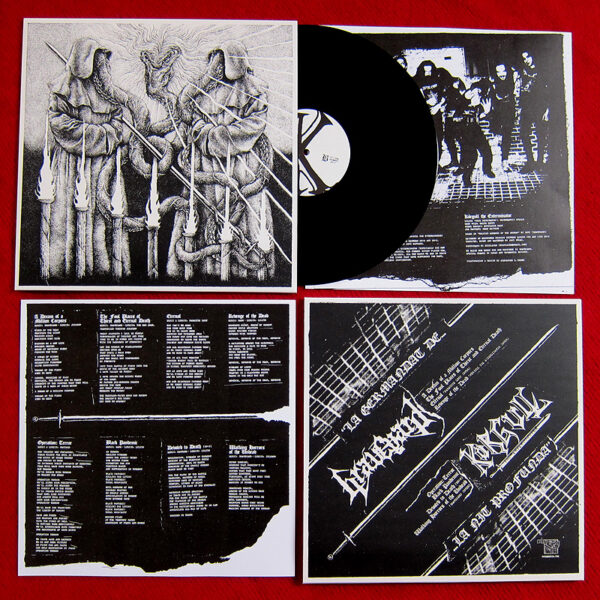 After all, one can’t help but think: what is actually the REAL of a split release… Is it just a convenient way to put together two different recordings by two different bands just to save money? Or does one take advantage of this unusual format and go all the way with it? GRAVEYARD and KÖRGULL THE EXTERMINATOR didn’t bother asking themselves the question twice…

On the surface, they may seem to come from two different planets: while GRAVEYARD have been churning death metal the ancient way with a Swedish flavour ever since they first roared back in 2007, KÖRGULL THE EXTERMINATOR are even more on the primitive side with their nasty and filthy hybrid of proto-black metal, thrash and punk. But besides being both from Barcelona, as soon as the later set foot in GRAVEYARD’s Moontower studio to record their second full-length back in 2010, an unholy pact in hell was forged. And now, this friendship forged in metal and steel is crowned by ‘La Germandat de la Nit Profunda’, a special release that takes the concept of a split to its logical extreme.

See, not only both bands have recorded at the same studio but they’ve also covered each other repertoire for the occasion. And on each cover, the drums are performed by the musician who played on the originals… This being said, , those two hadn’t waited that long to melt as while GRAVEYARD’s newest guitar player happens to be KÖRGULL’s Mark Wild, KÖRGULL’s live session bass player is now GRAVEYARD’s Javi. So besides the aforementioned covers, you get two new songs by each act, a new version of “Devoted To Death” (originally the opening track of their split with MORBID YELL) by KÖRGULL and a scorching ‘live in the studio’ take on PARADISE LOST’s “Eternal” by GRAVEYARD. Overall, 34 minutes of metal that celebrate the kind of spirit true metal lives for! Hail Spain and fuck the trends!