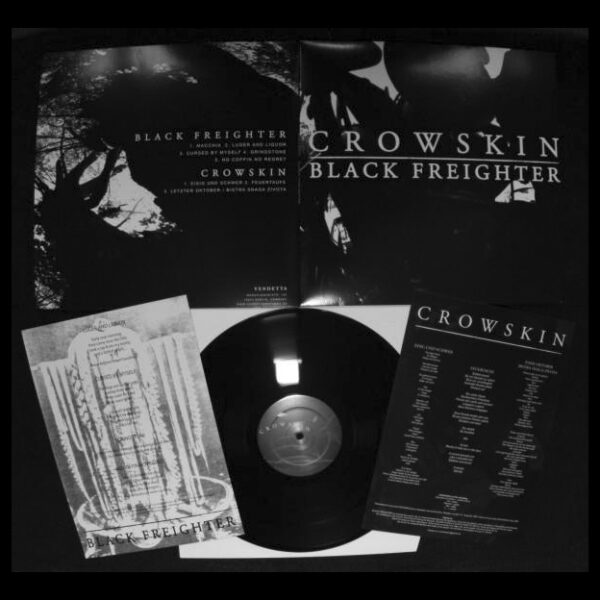 these two bands from the eastern german wastelands sound exactly what life is like in these times in this place: heavy , brutal , hopeless, depressive , despaired out of the ruins of leipzig ( black freighter ) and potsdam ( crowskin ) you can hear the downtuned sound of anger , hate , aggression and frustration ; this is the soundtrack to the downfall of our nation or of mankind ; the sound of the upcoming apocalypse

“Two heavy-weight doomcore acts from the empty, hopeless landscapes of Eastern Germany team up for a split LP that holds the balance between brutality and depressive bitterness. Leipzig’s BLACK FREIGHTER who give their vinyl debut on this one start a slow, but unstoppable steamroller of tuned-to-zero guitars in complex and blurred arrangements. Potdam’s CROWSKIN, known from their split LP with BLACK SHAPE OF NEXUS and last year’s “Harmony of death” 7″ deliver feedback-soaked ugly pieces of sludge with.”

“So finally the long-awaited split release by these two German downtempo/downtune monsters. CROWSKIN return rawer and uglier than ever with three painful slugde dirges over which the ferocious vocals by new singer Alexandra spit pure venom and sickness. Newcomers BLACK FREIGHTER combine the brutal complexity of COALESCE with the sheer slow heavyness of HIS HERO IS GONE and thus immure the listener with a massive wall of sound, causing feelings of isolation and vastness. Filling the void that the split up of PERTH EXPRESS and MEN IN SEARCH OF THE PERFECT WEAPON left. Learn to how to balance out the pain!”