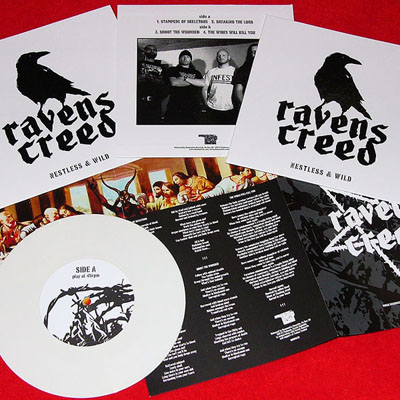 The news was brutal to say the least: the almighty Ben Ward having just announced that due to ORANGE GOBLIN’s tight schedule he had to return his butcher’s apron and resign from the collective known as RAVENS CREED, VENOM lovers and bartenders alike were getting ready to mourn the inevitable demise of their new favorite hellraisers who smacked them in the face in 2009 with the aptly titled ‘Albion Thunder’. But Fraser Craske (bass), Steve Watson (guitar) and Jason Graham (drums) being no beginners – having served in SABBAT, IRON MONKEY or SKYCLAD, no less – nor the kind of lads to give up that easily, they’ve decided to soldier on and show the world they STILL mean fucking business with a brand new 7 inches, even without Mr Ward’s towering assistance.

And indeed, although it’s their first ever recording with newcomer Al Osta on vocals, the four new tracks displayed on ‘Nestless & Wild’ may overall clocks around eight minutes only but those might just be the toughest eight minutes of your life. Because play-on-words and metal trivia asides (track number two is called “Breaking The Lord”, duh!), the ‘new’ RAVENS CREED is as vitriolic as the former one, if more so. Now adding an even thicker thrash-metal edge to their sonic assault, they’ve lost none of their venomous rasp nor their ability to repeatedly punch you in the face with a grin while having a pint with their mates. Yes indeed, the tanks are STILL rolling my friend and they’re once again ready to crush you so get the fuck out the way of RAVENS CREED!