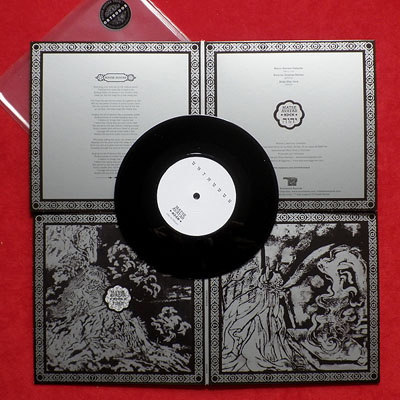 Try to picture this: a blood red sky upon a desert landscape where few scattered blade of grass somehow survive. In silence, three mysterious men in robes are converging to what’s left of a former little church, now only a shadow of its former self with half of a wall remaining and gathering dust. As the sun sets in the West and the shadows grow bigger, they all quietly gather of the remains of an altar and soon and begin the chanting, whispering words in ancient tongues man has forgotten the real meaning a long time ago, for no one to hear but the ghosts still lingering on in between this world and the other on this god forsaken piece of land. Indeed, Orthodox have arrived and the ceremony has begun.

After two impressive and droning albums – ‘Gran Ponder’ in 2006 and ‘Amanecer en Puerta Oscura’ in 2007, both licensed in the US by cult-label Southern Lord – and the surprising left-turn that was last year’s ‘Sentencia’, Orthodox first ever EP on Doomentia sees them once again ditching whatever expectations their fans could have for… Well, something else. If “Matse Avatar” is a warrior call powered by throbbing bass and circular riffing, evoking both OM and Amon Düll II leading galactic troops on their way to invade planet Earth with a subtle Rush reference thrown in the pot (can you spot it?), its flipside “YHVH” goes the exact opposite way, an almost contemplative instrumental of delicate beauty in pure Earth-style, like the calm before the storm.

In keeping with both Doomentia and Orthodox tradition, ‘Matse Avatar’ also comes in a super classy gatefold sleeve printed by metallic colour, with lyrics and pure magical powers engrained on wax. So tell me, can you feel the vibrations of doom?