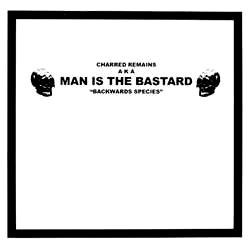 In 1992, Charred Remains AKA Man Is The Bastard agreed to do a 7″ release with German label Ecocentric Records and delivered “Backwards Species,” a seven-song “skull powder-keg” of exploratory, progressive aggression that is still heralded today as one of M.I.T.B.’s most memorable sound offerings. Packed with complex, dual bass guitars, frying pan six-string axe work, incredibly diverse drumming, and loyal, heartfelt lyrics/vocals, the record was nearly gone immediately after its release. It has now been re-issued under “skull authority” by Deep Six Records in all its awareness-based glory.

A1 Ether Rag (Permanent Smile)
A2 Stocks
A3 Blood Gutter
B1 Heretic’s Fork
B2 Koro Treatment
B3 Justice Is Swift (Jack)
B4 Poacher – this instrumental piece was initially not listed anywhere on the original insert for this release.