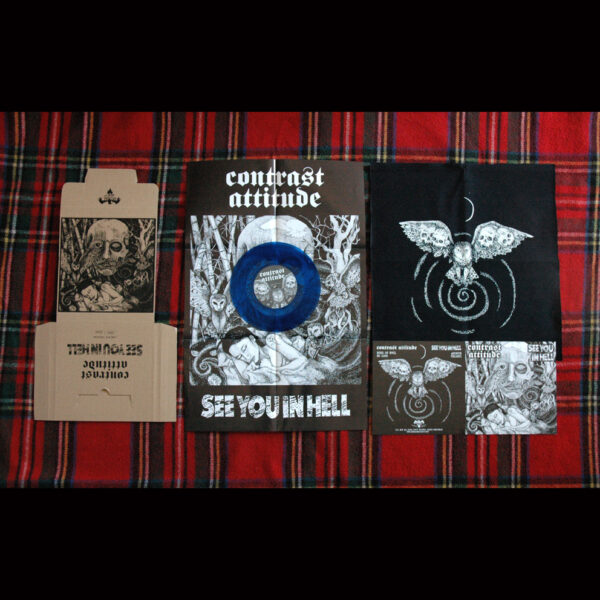 Brand-new split of two bands from two opposite parts of the world! CONTRAST ATTITUDE from Japan delivers the punch straight to the point with two blasts of loud apocalyptic d-beat raw punk. The legacy of British metal punx of late 80s like BROKEN BONES and (later period) DISCHARGE, Scandinavian käng of SHITLICKERS or ANTI-CIMEX and Japanese distorted wall of noise of bands like DISCLOSE and CONFUSE is definitely right here in the music of these maniacs from Mie-city active already since 1998! After split EPs with CROW and SYSTEMATIC DEATH is this split already the third split EP of SEE YOU IN HELL from Brno-city/Czech Republic with Japanese band. Two songs of  energetic and ass-kicking hardcore/punk with gravely vocals and gang choruses. Like usually with killer sound from South-Bohemian Hellsound Studio and mastering job by Jack Control (Enormous Door Studio). Record cover artwork by talented artist Murilo Pommer from Brazil in pretty dark and bleak mood like always from this master of pen! Myspace and myspace