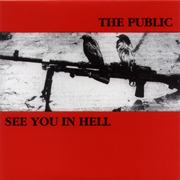 “Wooah there….SEE YOU IN HELL are first up – 5 tracks of Blistering Czech hardcore punk. The tunes rock out in an extreme metallic crusty fashion, the drums are a total grindcore assault, the vocals are shouted with passion, the lyrics are bleak yet profound – this is superb! Ok I’ll flip it over… THE PUBLIC are form Slovakia, they are coming form basically the same place musically as SEE YOU IN HELL, only they break up their two longer songs with some atmospheric parts that really contrast with the intensity of the full on raging parts. The copy I got came on mixed up white and clear vinyl, and the packaging, stickers and lyric booklet are all ace. Lyrics and lyric explanations are provided in Czech, German and English. If you haven’t got this already, then you need to get it!!”
TOTAL ANNIHILATION Newsletter

“SEE YOU IN HELL blaze through their side of this split with an onslaught of Scandi-thrash with hints of distorted excess that suggest, but never quite goes all the way over to the FRAMTID, ATROCIOUS MADNESS side of the tracks. Wow, a SEVERED HEAD OF STATE/SEE YOU IN HELL show would be like a dream to come true. Just tell me when. THE PUBLIC are decent enough, but having to follow SEE YOU IN HELL doesn’t help them any, and the slow, emo breaks in between the thrash style drums and power violence vocals just didn’t work for me. That said, if there is a split to get, even if for one side, then this might be it. (Unidos)”
URBAN GUERILLA zine issue 14

“It’s time for war again… a thrash war between two power violence influenced hardcore teams!! SYIH are much less experimental on this new recording with no time wasted and the careening thrash at full tilt all the way. These Czech thrashers get the job done, by far their best outing. Slovakia’s THE PUBLIC have been a bit mordant lately so its great to see 2 new blasts of mayhem from them. Total ultra-core… and yet they don’t hesitate to throw a monkey-wrench in the machine with some gloomy, discordant tribal bits between the screaming violence. A team effort between 22 labels!”

“SEE YOU IN HELL: harsh, precision grinding crust-core from the Czech Republic with gruff vocals, hateful guitars, and drums that are insanely machine-like, a veritable whirlwind of hardcore fury. Lyrics deal in pain of existence yet are vaguely uplifting kind of when you are taking a vicious beating and you know that eventually you will either pass out and die or they will bore of killing you and will just go away. Brutal. Has a member of MRTVÁ BUDOUCNOST in their fold. On the flipside, the PUBLIC: as equally as harsh as SEE YOU IN HELL but they are so much more melodic, non-distorted guitar lines drop in and out over odd times and thick rhytms while multiple, raw-throated, vocals shout their fury over the distortion bombs and fast-core intensity of their assault on happiness. Technical without being wanky, brutal without letting up, the PUBLIC could appeal to many across a wide spectrum of hardcore fans. Finally, the packaging is top-notch for a 7“, like super thick quality vinyl it is pressed on, and includes two stickers (for each band), an eight page booklet with all text translated from Czech to German and English and a double-sided advert for other labels that is titled: „In the Spirit of DIY Community“. Very Recommended.”
MAXIMUM ROCKNROLL issue 241
“Starting off w/the Public from Slovakia: I go back and forth on this one – one minute they’re in a blast beat aarrrgggh bllaarrg frenzy and I’m not stoked, then they kick into some super heavy stompy powerful parts that are amazing. Heavy tribal style drumming, a thick guitar sound, and vocals that range from the bllaarrg to epic sounding. Needless to say when it gets epic and huge sounding, I love it. And pulling off both well is always a feat, which Public do. See You In Hell (from Czech) amp up the power and play loud and heavy with a powerful delivery to their abrasive style. The guitars are going totally apeshit in a frenzy of chaotic speed, while the overall tempo of the song stays more moderate. The mix on this is odd with the drums more up front that the raspy vocals. But it does sounds heavy and huge. Both of these bands have a good sound and style in the apocalyptic crust style without sounding like you’ve heard it all before. This EP promotes international DIY hardcore and either is a multi-label release between about 20different labels, or else they’re just giving props to good people.”
SLUG AND LETTUCE

“Whoa, this splitted platter was released by no less than 21 different labels, how cool is this!?! While THE PUBLIC are offering two varied cuts of either rippingly fast thrash or blastbeat driven slaughtercore, SEE YOU IN HELL rage through five assaults of hammering, slightly grinding thrashcore!! Great music all the way!!”

“A joint Czech/Slovak effort here, SEE YOU IN HELL from Brno pull of some gnarly HC thrash with plenty of double kick action over thick guitars and throat ripping vocals. Get in! Flip the disc and we get THE PUBLIC from Slovakia who offer up two tracks of chaotic thrash/grind interspersed with quieter melodic bits. Both bands have intelligent, pissed off personal/political lyrics with eplanations in English and German. We got this on weird kaolin and morphine coloured vinyl! Get this if you can.”
REASON TO BELIEVE issue 10

“Slovakian The Public starts this split of with a sample from some movie, mood filled music and some rumble and fighting, then a intro thingie takes over played by the band. And then, a crusty hardcore attack! Some breakdowns, some grinding and overall intense. It’s varied played with the intro thingie coming back, just to lead us into grinding madness again. The sound is very good, think with fat guitars. And with three people dividing the vocal duties between them it gives it that little extra. I like this. See You in Hell are from the Czech Republic and share they heavy sound and intense tracks with their 7″ mates. 5 very straight forward frantic tunes. This is the 2nd See You in Hell split release reviewed in ATTACK! And the last time they drew the shorter straw, but this time I think it’s the opposite actually. It’s really hard ’cause I like both bands a lot, but SYIH are a tad more pissed off and therefor I choose their side both to open and finish with, give that extra spin ’cause I wanna hear it one more time before it leaves the turntable.And hey, fucking 21 labels releasing this!! “
http://www.attackfanzine.net

“Howling hardcore from former Czechoslovakia – THE PUBLIC come from Slovakia and SEE YOU IN HELL are from the Czech Republic. THE PUBLIC have a thrash/grind sound, with some Scandinavian influences while SEE YOU IN HELL have a slightly more straight-forward speed attack (although there is still some grind) and they are the stronger of the two bands here. Nicely packaged in a cardboard sleeve and with a booklet and over 20 labels have joined together to release and distribute this record.”
SUBURBAN VOICE issue. 46