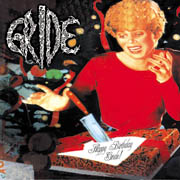 Very well known Czech extreme hardcore or power gride core as they says. Special seveninch to celebrate 5 years of their existence. Compilation of rare songs – most of them is first time on vinyl. 17 songs in total. Happy birthday Gride!!!

“Extreme hardcore/grind from the Czech Republic. Fast as fuck songs with some covers (Napalm Death, Health Hazard & Rupture). This is a look back at their 5 years as a band with collected tracks from various recordings that were not used on their two split 7″ eps (although most of these songs have been on past cassette releases). This also comes with extensive liner notes and one of the slickest looking full color ep sleeves I´ve seen in a while. Nice.”
Slug and Lettuce 71

“Over the top grindcore from Czech Rep. released to celebrate Gride´s fifth birthday. Tracks mainly from cassette only releases from over the last 5 years. The stuff is well done & there´s some mad sampling going on too. Includes a 1 second cover of Napalm Death´s Dead & Trapped by our own Health Hazard.”
Reason to Believe 5

“This is to celebrate Gride´s 5 years of existence. Not a long time I know, but during those years Gride have contributed some storming “power gride core” which has been un-lashed upon underground scene with total enthusiasm and respect – and rightly so. Behind the onslaught there is a strong political message, and they do ti in their native tongue – Czech. Side A has 12 short manic trax which are high standard thrashing crustified grind, like the best stuff Agathocles ever released – you know, the more manic hardcoregrind stuff. The B side has 4 trax – two of which are covers of Health Hazard and Rupture. For me the A side rips! Great record, great full colour cover and a huge info sheet with everything you always wanted to know about Gride, but were too afraid to ask.”
Hell and Damnation 11

“Good dose of thrashing grind straight from Czech heroes. This record is celebration of they 5 years of activity in the scene… You can find here 17 songs taken from various sessions and including three covers (of Napalm Death, Health Hazard and Rupture)… Full colour cover and very informative insert with very cool photos… Those who heard the split LP with Mrtva Budoucnost don´t need to be convicted to listen this band. Good grind thing!!!!”
Violence 3

” This is a kind of money business ep due to the fact that all the songs from the side A were previously recorded for the excellent three way split tape GRIDE/ CEREBRAL TURBULENCY/ MALIGNANT TUMOUR. All the songs are in the same order and to be honest even the sound quality of the real release is better. Anyway, for those of you who didn’t search so much in the little distro available on the web to find one of this copy here it is on vynil.The advantage of the vynil (like the black point…) is the sound as said before because it is giving the old freex like me the feeling that the recording had been made quickly like that and that was all.far from it of course. Anyway all the songs presented on this side are fantastic and according to me this is this kind of release that amde the notoriety of GRIDE. And not only in the grind core scene. I am not a fan of the band but I have read the inlay card during the side B because I always act like that during a review and there are a lot of explanations why on this ep only one new song is apparing. And this is not because of the ca (the option I choose in the beginning of the review, remmeber?…). No they made it because of the melancholy and the fact that they have began the band since 5 years n,ow and that it was good according to them than rahter making it on the reh room and listen to the result at the end they wanted you to participate to the thing. And sometimes it is not so bad and it is always a pleasure to listen to the best songs of GRIDE.”
Impaired zine

“More raging stuff from Czech, fuck there seems to be a lot of crust and grind bands there. You may remember Gride from split LP with Martva Budoucnost from a few years ago…. Gride fall into the grind cotegory mostly, but in places are just in fast as fuck territory… this EP is a compilation of previous recordings from their 5 year existence. Includes covers by Napalm Death, Health Hazard and Rupture.”
Ripping Thrash 21