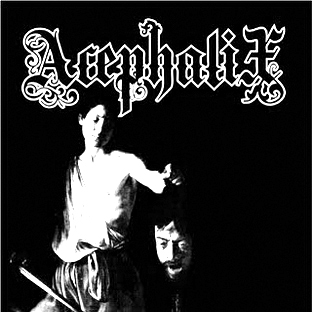 A brutal combination of Low end Metallic Distortion, Pummeling riffs and Gnarled vocals, San Francisco’s ACEPHALIX’s Debut 4 song 7″ takes influence from all over the map of Extreme music-from CELTIC FROST to CRO-MAGS and INTEGRITY, from WOLFPACK and Later ANTI-CIMEX to SACRILEDGE and AXEGRINDER, but has hammered out and forged it’s own sound by relentless gigs around the SF Bay Area over the past year. Featuring current and former members of THE RIFFS, DEPRESSOR, POISON IDEA, DEFIANCE, DEATHCHARGE and BLOWN TO BITS, this is the heaviest thing prank has released in almost fifty releases, a modern attack yet reminiscent of early classic prank releases by DAMAD, ELDOPA 1332 and the bleak punk metal fusions of the late 90’s and early 00’s. First printing in a foil stamped sleeve.