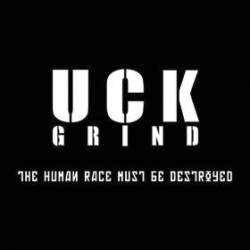 UCK GRIND – The Human Race Must Be Destroyed – CD

This is the first album that makes me repeat the first track more than 10 times in the first spin…that’s not a bad thing; I just wanted to understand all the words spoken by the vocalist as the introduction of this album is actually TC welcoming his friends and enemies to the underground world of UCK Grind while explaining the nature of their album, is that amazing or what?

This band from Turkey plays a soft kind of Grindcore, it has a lot of groove and several super-catchy riffs that will make you head-bang for hours. Their music is like an iron boot kicking your face exactly 12 times you know? This band uses the all time favorite structure known as “Ascending Design”, most tracks start with a harmonious overture wrapped with clean guitars and slow-paced beats, then after a while the song adds velocity and intensity to finally end with a classic pause. It is not the most original or the most brilliant schematization ever, but these Turkish fellows made it work just fine; also their genre helped to experiment a lot as they stayed in the middle of Death Metal and Grind, they are not as fast as Grindcore but they are not as layered as Death Metal, just like Kill By Numbers if you remember the name.

What I truly love the most about UCK Grind is their concept, I love their “We’re all animals/corruption of ethics” ideology, it’s a little pessimistic but it is also original and true; they also add high-quality lyrical content to the mix, they talk about Narcissism, Hysteria and some other things I didn’t understand because of the language; but at least they broke that “let’s write about raping dead bitches, eating feces and pornography” format and I always like a band who writes intelligent lyrics.

In the end this band is still a little unpolished and inexperienced, this is their debut album after all, so I’m sure they’ll improve a lot of things in the future. Now they are just a good band with a great proposal waiting to be refined by its members.

Best Tracks: “Lost In Silent Prayer”, “The Human Race Must Be Destroyed”, “UCK”