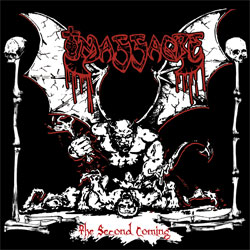 The mysterious recording so many fans have talked about, and so many others never knew existed, the long lost MASSACRE 1990 studio demo with previously UNRELEASED songs is now unveiled! Kam Lee (original voice of DEATH/MANTAS) together with NunSlaughter Records and Hells Headbangers have unearthed this long buried casket originally not for the public. Written during 1989 – 1990 and recorded with Massacre’s temporary “SECOND COMING” line-up before the “FROM BEYOND” album. These songs retain the classic MASSACRE sound and horror appeal as expected from this genre defining band! Enter this tomb and revel in The Second Coming.