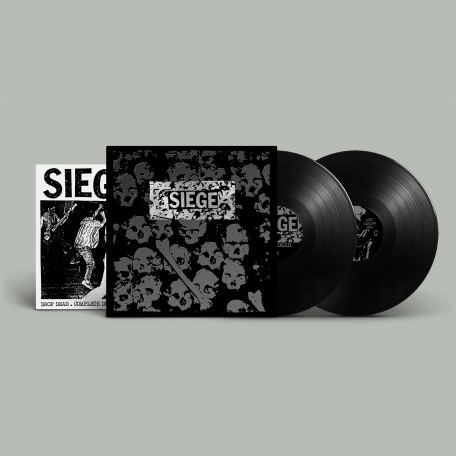 REGULAR BLACK version limited to 400 copies.
Not many words needed to introduce SIEGE: they’re the undisputed generators of all hyper-speed Hardcore, Grindcore and blasting fast Thrash and have massively influenced a world of maniacs bringing musical extremities to the most outraegous boundaries, the first most obvious example being Napalm Death that mentioned them as an inspiration since the “Scum” era and covered “Walls” on their legendary Mick-Shane-Bill-Lee times Peel Sessions, or Heresy that covered “Conform” and the list goes on forever! In the early ’80s SIEGE paved their way into the violent Boston Hardcore scene delivering the fastest and most furious Hardcore ever heard. This double LP collection is the first ever official SIEGE release in Europe and their definitive, most complete discography to date, consisting of:
– “Drop dead” studio session 1984
– “Cleanse the bacteria” tracks 1984
– Out takes from the original 1984 studio session
– Lost session 1991 with Seth Putnam on vocals
– UNRELEASED version of “Grim reaper”
All remastered for vinyl from the best audio sources in existence. Housed in a deluxe gatefold sleeve with silver hot foil stamp logo on the front and partial UV print, including a booklet with rare and never seen before photos, lyrics, original artworks.