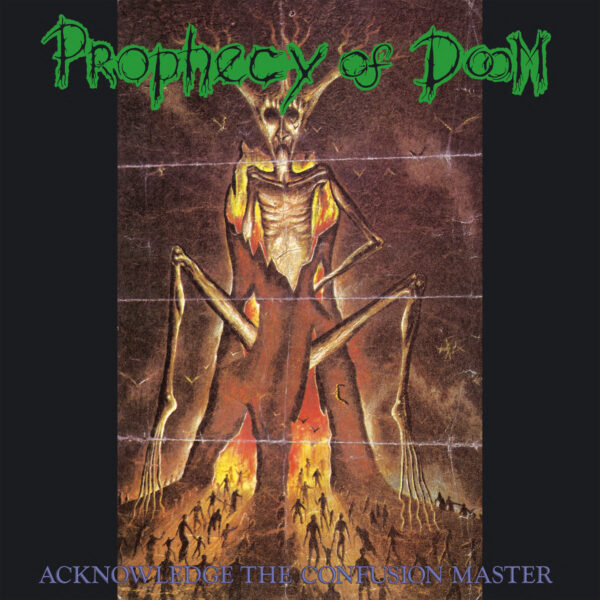 https://peaceville.bandcamp.com/album/acknowledge-the-confusion-master
UK grind/death veterans Prophecy of Doom formed in Gloucestershire, 1988, with bassist Martin Holt & vocalist Shrew Schroder uniting to embark upon a journey to create something challenging and memorable to stand out in the UK scene. After a few personnel changes whilst looking to establish a permanent recording line-up after their 1988 demo & the 1989 EP, ‘Calculated Mind Rape’ (which had brought the band to the attention of legendary DJ John Peel), the time had come to create their debut full-length album.
And so ‘Acknowledge the Confusion Master’ came to be, and was released in 1990 on the burgeoning Peaceville Records, and their then newly established sub-label, Deaf Records. A highly effective concoction of blasting amid a titanic wall of raw grinding riffs and chaos propelled Prophecy of Doom to the forefront of the scene, also leading to two recording sessions with John Peel, & further enforcing Prophecy of Doom’s position on the map of notable British grind acts.
As a further distinguishing factor, there was a great depth and consideration to the themes of the album, perhaps in stark contrast to how the tracks were presented sonically. Written by mainman/vocalist “Shrew”, there with a strong philosophical element to the lyrics, an exploration of awareness and intuition amid an era of increasingly suppressed feelings, and an urge to rise above mental restrictions.