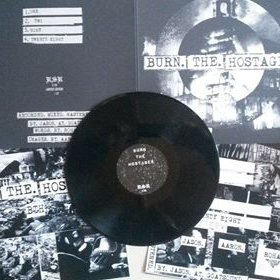 Burn the Hostages – LP – : Burn the Hostages are a band based around a single core principle that is deeply rooted in their collective psyche – utter laziness. Three people with nothing better to do really, somehow managed to find the time in relatively normal lives to record songs that take influence from bands far busier than them. If the idea of Eyehategod listening to Grief in a dank shed, with Buzzoven bringing them warm beers in Australia…in 2018, is up your alley, then this is for you. Turn it up loud, pretend you don’t have better things to do for 25 minutes and waste away – grubby sludge from the underside of the world, Burn the Hostages.FEATURING ROHAN/EXTORTION