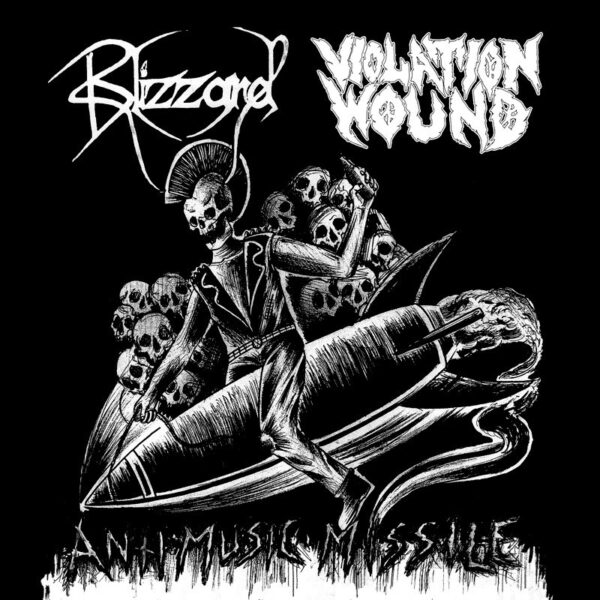 The latest in a long series of split EPs, this one is probably the meanest, filthiest and most punkish DOOMENTIA had the sadistic pleasure to release!

On one side of the wax you will find Violation Wound who were born in a beer and whiskey soaked basement, driven by the burning desire to rip out a dose of 100% real punk rock. Nothing trendy, nothing wimpy, nothing pretentious, just quick-fire face melters fueled by aggression and kick ass riffs that burrow into your skin. Violation Wound consists of Chris Reifert (Autopsy), Joe Orterry and Matt O’Connell and they have no interest in the safe, sanitized plastic punk that saturates the world today. Their tracks will prove that point!

On the other side of the ring, not one to be undermined by this bad taste assault, you have Germany’s BLIZZARD, proud defenders of all things ugly the early 80’s way, already responsible for four full-lengths and a couple of splits that reek of WARFARE, VENOM and the most primitive MOTÖRHEAD tribute you could think of… When the three members of the same band are called ‘Tankcömmander Atze’, ‘Bälor the Exterminatör’ or ‘Pösercrusher Jan’ and have two minutes outbursts about ‘useless shit’ or ‘underwater shark’, you know they mean business anyway. Fuck!