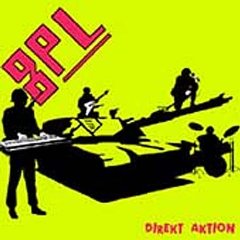 “If you enjoyed either the In/Humanity collection I posted earlier this week OR the Initial State album I posted back in November, you should probably check out the cleverly-named Guyana Punch Line. Why? Because it was the band formed by In/Humanity vocalist/cult icon Chris Bickel and Initial State guitarist Kevin Byrd after the dissolution of said bands. And GPL is the perfect bridge between those two groups: Slightly more composed and polished than In/Humanity and slightly more spazzy and experimental than Initial State.GPL was Bickel continuing to do what he did best, which was spreading his own real and unique ideology (it’s called “Smashism”) through the guise of blazingly fast hardcore songs with goofy titles. Guyana Punch Line has since broken up, and Bickel has moved away from hardcore, instead choosing to focus more on electronic/experimental type stuff. But with so many choice nuggets (such as Direkt Aktion) left behind, we’ll still be busy for years trying to put his mess back together.” tigernet.no